William Somner (1606–1669) was an ecclesiastical lawyer based in Canterbury, a well-known antiquary of Kent and Canterbury, and an early pioneer of Anglo-Saxon studies.[1]

The traditional date of Somner's birth is 1598 (ODNB) but his family thought that he was born in 1606 and this seems to be confirmed by recent research by David Wright. Somner was educated at the King's School, Canterbury, under the headmaster John Ludd with whom he retained a close friendship until the latter's death (1649). He was apprenticed to his father, William Somner (senior), as a notary public and clerk of the ecclesiastical court in Canterbury. His father was the registrar of the court until his death; his son succeeded him in this office, apparently appointed by Archbishop William Laud. An entry in the Register of the Archiepiscopal Court of Canterbury, 26 September 1635, shows both father and son active on the hearing of an injunction concerning the rights of the French and Dutch churches in Kent:[2]

The activity of the ecclesiastical court was ended by Parliament in 1643. Somner made the last entry in the act book that year; in 1660 he made the first entry on the following page on the re-establishment of the court and its officers at the Restoration.[3] In 1660 Somner was also appointed to the office of Auditor and Registrar to the Dean and Chapter of Canterbury, which had also been vacant since the 1640s, and also Master of St John's Hospital, Canterbury, and Harbledown Hospital.

On his death in 1669 Somner's widow Barbara sold his library to the Dean and Chapter. The Cathedral Library retains around 100 of his printed books and many volumes of his papers and manuscripts, including transcriptions of significant Anglo-Saxon and other historical records. Somner and his brother John had already given books a few years earlier to the newly rebuilt Chapter Library. These are listed in the Benefactors' Book. Somner's manuscripts were listed in Edward Bernard's Catalogi librorum manuscriptorum Angliae et Hiberniae, in unum collecti, Oxford, 1697.[4]

The Cathedral Library has about 100 books which had belonged to William Somner, the Cathedral's Registrar. Some were donated by Somner in the mid 1660s.[5] Most came from the purchase of part of Somner's library from his widow in 1669.

This list below is based on a book-by-book search on the shelves of the Chapter Library and on a list created by output from the University of Kent Voyager system (29 January 2009)
The list below is arranged by shelfmark. It shows books with significant inscriptions and does not yet have entries for the majority of the books, which simply have a price, followed by Somner's initials.

The Cathedral Archives also has manuscripts owned or written by William Somner.

Shelfmark W/C-2-56
John Cowell. Interpreter: or booke containing the signification of words: ... mentioned in the lawe writers, or statutes of this ... Kingdome.
Cambridge: 1607.

Shelfmark W/D-4-27
Richard Broughton. Ecclesiasticall historie of Great Britaine deduced by ages, ... from ... our Saviour, unto the happie conuersion of the Saxons, ...
Douai: 1633. 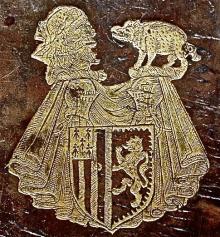 MS notes in William Somner's hand in chapter on Kent.

Shelfmark W/H-5-21
Sir William Dugdale. Origines juridiciales, or, Historical memorials of the English laws, courts of justice, forms of tryall, punishment in cases criminal, law writers, law books, grants and settlements of estates, degree of serjeant, Innes of Court and Chancery : also a chronologie of the lord chancelors and keepers of the great Seal, lord treasurers, justices itinerant, justices of the Kings Bench and Common Pleas, barons of the Exchequer, Masters of the Rolls, Kings attorneys and sollicitors, & serjeants at law. 1666.

Inscription on first free endpaper: Whatever is here in ye margin of mr Somners hand is in his other volume.

Apparently one of two copies annotated by William Somner, the other being W/E-6-20(2).

Purchased by William Somner for 7 shillings.

Gospels of the fower Euangelistes translated in the olde Saxons tyme out of Latin into the vulgare toung of the Saxons, newly collected out of ... monumentes of the ... Saxons, ...
London: 1571.

Shelfmark W/L-1-48
Sir Henry Spelman. Larger treatise concerning tithes, long since written and promised by Sir Hen: Spelman ... Together with some other tracts of the same authour, ... 1647.

Shelfmark W/L-5-40
John Cosin, Bp. Scholastical history of the Canon of the Holy Scripture or the certain and indubitate books thereof, as they are received in the Church of England..
London: 1657.

Shelfmark W/L-7-30
Johannes Crellius, Socinian. Expiation of a sinner. In a commentary upon the Epistle to the Hebrewes..
London: 1646.

MS notes in sig. Ttt almost certainly in William Somner's hand.
17-century blind-stamped calf, frames of fillets and rolls; traces of clasps on back board.

Shelfmark W/P-6-19
Robert Filmer, Sir. Quaestio quodlibetica, or a discourse, whether it may bee lawfull to take use for money.
London: 1653.

Extensive annotations in the hand of William Somner, confirmed in a note (by E. S.) pasted on the front pastedown and in the handlist compiled by C.E. Woodruff.
Label pasted on front pastedown with an inscription recording William Somner's presentation of a copy of the Antiquities to the city of Canterbury at a meeting of the Burgmote in 1640, with a reference to the Burgmote minutes.

Shelfmark W/S-11-14
William Somner. Antiquities of Canterbury. Or a survey of that ancient citie, with the suburbs, and cathedrall. ... With an appendix ... wherein ... the ... records of chiefest consequence, are faithfully exhibited..
London: 1640.

Quarter bound in orange morocco with plain wooden boards; bound at the Cathedral by Jim Wayre in 1977, stamped '19JW77' on the inner back board.

Books no longer at the Cathedral Library

Reported by a bookseller in September 2018. Apparently sold as a duplicate in 1828.
With a later ownership inscription of Thomas Vowler Short, 'Student of Christ Church & Rector of Kingsworthy', (purchased from 'Corkran'[6] in the Strand for 18 shillings in 1831), and the bookplate of Gilbert W. Child.